I felt bad for missing last week, so I decided to make up for it by giving you TWO reviews today! Happy Birthday to you. I know you can hardly contain your excitement, but please do try.

As I'm sure most of you are aware at this point, in addition to book reviews I also write/enjoy poetry and comic books. Over the course of the last year or so, the Daily Genoshan has included a handful of poetic and comic reviews to satisfy this part of my brain. However, it hadn't until now occurred to me that, since this is an online book review, I should include online media in my realm of possibly reviewed items. From now on I'm going to make a conscious effort to include online books/comics whenever I come across anything that I think is worth mentioning. And it just so happens that I have something worth mentioning right now! Would you look at that, what're the odds?

First up, we've got Tom Siddell, a writer/artist from the UK, whose webcomic Gunnerkrigg Court, has been getting a ton of praise lately. YALSA (the Young Adult Library Services Association) just named it one of their 2010 Great Graphic Novels for Teens, and I was lucky enough to stumble upon the first hardcover volume recently, so I thought I'd take a look. 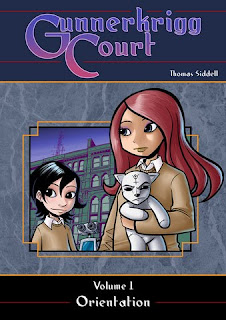 Wow. I didn't realize it was a web comic until after I finished that first volume, but I was sooooooo pumped when I found out. I immediately went online to catch up with the series (Siddell posts new pages every Monday, Wednesday and Friday). I continue to be impressed.

Gunnerkrigg Court follows young Antimony Carver as she tries to cope with the death of her mother and disappearance of her father. She moves to a new school—but can you really call it a school? It's more like a massive scientific complex—and quickly becomes best friends with Kat, whose parents teach at the school... and used to know Antimony's mother and father! It kinda has this Harry Potter feel to it, but it's also got science and robots and isn't as plot-driven. What really makes Gunnerkrigg Court work, though, is that Siddell is incredibly patient, and doesn't show his hand early. Most of the issues revolve around Antimony going through her everyday life in this extraordinary place, only gradually learning more about its mysterious past. This allows him to be funny and down to earth while patiently releasing information on the larger story that's now beginning to show itself (the webcomic is on chapter 25 now, but readers can start from the first page by clicking here. It might have a stronger draw for younger audiences, but I'm in my twenties and I still check back every Monday, Wednesday, and Friday for new pages. It's a fantastic book.

I've only been reading Gunnerkrigg Court about a month or so, but this next webcomic I've been addicted to for over a year and a half now. I got hooked at San Diego Comic-Con 2008 when a friend of mine asked me to pick him up a t-shirt and a signed poster. 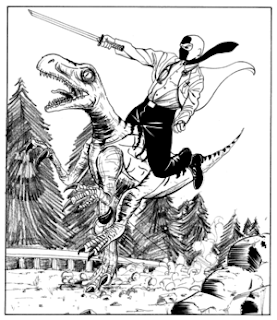 Just like Siddell, every Monday, Wednesday, and Friday Christopher Hastings updates The Adventures of Dr. McNinja by posting a new page. Thank God, too, because at this point I don't know what I would do if he decided to stop. He's a hilarious writer, and the art has been getting continually better since the very first arc.

A little backstory: Dr. McNinja is a doctor, and a ninja; his receptionist is a gorilla named Judy; he has a twelve-year-old sidekick named Gordito (and Gordito has a bad ass mustache and rides a velociraptor, btw); sometimes the good doctor cures children afflicted with Paul Bunyan's disease, sometimes he chases King Radical on an evil unicorn posing as a motorcycle, and sometimes he punches Dracula in the face. EVERY PAGE IS EPIC! I really can't even tell you how great Dr. McNinja is, you kinda have to experience it for yourself. I know that's a cop out for someone who writes book reviews, but it's just too amazing for words. I'll work on inventing the words that can ably describe the incredibleness while you start reading.

The Adventures of Dr. McNinja
by Christopher Hastings

No ratings. Both of these webcomics are ongoing, and while I assume they will continue their awesomeness into the far future, maybe they'll start sucking the day before I'm about to become unimaginably famous for writing such precisely correct numerical ratings with my reviews. Probably not, though. Just read and report back anyway. Keep reading, Genoshans!
Posted by Brian McGackin at 2:22 PM No comments:

LOVES this guy's poetry, and I found this book on the cheap a couple weeks back.

In 1899, Bohemian poet Rainer Maria Rilke—then only twenty-two years old—visited Russia with his close friend Lou Andrea-Salomé, the famous author and psychoanalyst. There he met with great Russian writers like Leo Tolstoy, simple farmers and peasants, and a vast, beautiful landscape. The trip had such a profound effect on Rilke that, upon returning to his home in Munich, he immediately composed Stories of God, a collection of interwoven tales focusing on the role of God and nature in man's life, and published it the following year. Although the collection is now more than a century old, the easy, conversational tone in which it was written allows the book to be read as if the author were living today. Rilke's poetic style is known to be both haunting and lyrical, and this work shows that his prose isn't any different. Stories of God seems to me at least on par with his more famous Letters to a Young Poet, which wasn't published until after Rilke's death. Similarly, the dozen or so stories in this collection foreshadow a depth of vision and insight that the poet would fully develop decades later in his Duino Elegies and Sonnets to Orpheus. Rilke's understanding of the nature of spirituality within mankind is unrivaled, and each scene provides further evidence of this mastery.

What really struck me about the book, though—aside from the beautiful lyricism and seamless interweaving of each story—lies in the implications of the title: Stories of God. Not Stories of Christianity or Stories of Religion or even Stories of Faith, but Stories of GOD. Rilke takes the idea of a divine presence and strips it of everything that can be traced back to any one faction or creed. The God of this book is a personal one, whom the narrator knows intimately but has never met. The simple setting and straightforward telling of each tale—usually by the narrator to a friend or passing acquaintance—allow the scope of the collection as a whole to broaden significantly. That isn't to say that the impact of these stories are in any way diluted, however. Stories of God is in fact a hub that is accessible through almost any avenue of spirituality. Take for example this conversation between the narrator and a gravedigger that takes place in "A Tale of Death with a Strange Postscript:"

Suddenly, seized by a powerful revulsion, I said, "Why are you doing that?"
The gravedigger continued to smile. "It is a living," he said, "and then, too, most people do the same as I do, don't you agree? They bury God up there the way I do people here." He pointed up at the sky and explained to me, "That's a big grave too. In the summer wild forget-me-nots grow on it—"
"There was a time," I interrupted him, "when people buried God in heaven, that's true."
"Has that changed?" he asked with a strange sadness.
"At one time," I continued, "everyone did throw a handful of heaven over Him, I know that. But at that point He actually wasn't there anymore, or maybe He was..." I hesitated.
"You know," I started up again, "in olden times, people used to pray like this." I spread my arms out and felt my chest involuntarily expand.

From here, the narrator goes on to tell the gravedigger a "fairy tale" about God trying to inch heaven closer to earth. Many of the exchanges in Stories of God follow this same pattern of discussion: the narrator asks a friend or neighbor a seemingly benign question; the friend or neighbor replies in a way which surprises the narrator; the narrator is then reminded of a story that is in some way about God. The narrator also often requests that the listener retell the tale to any children he or she may know, which is fitting, since most of these stories read more like fables, anyway. It's that feeling of ancient wisdom that usually accompanies the writings of someone like Aesop or Confucius that makes Rilke's collection truly come alive. "The Tale of God's Hands," for example, which begins the book, concludes with the moral that "without God there is no completion," as His hands discover when they try to create things on their own. Rilke helps us to understand the importance of this "completion," but is able to avoid much of the cynicism and trepidation that accompanies more direct discussions of faith or religion. The book may have been written very early in Rilke's own life, but Stories of God is a collection that is sure to have a profound effect on readers of all ages.

Story—8.17
Rilke uses simple characters that appear in most cultures to great effect, breaking down the collection into a series of connected vignettes that easily could have taken place in almost any part of the world.

Style—8.67
The voice of this collection is consistent and accessible, but alarmingly profound. Nothing is preached or overstated, and the stories never feel contrived. I would believe it if someone told me that these are actual fables and folk tales passed down from generation to generation in Germany.

General—8.33
Stories of God is highly enjoyable, and very easy to get into/through, but doesn't have too much drive. It's easy to pick the book up, take what you want from the first few stories, and then walk away. Each individual story wraps up rather nicely, so it isn't very hard to put it down anytime.

Rilke is a great writer, I hope you guys pick him up whenever you can. Keep reading, Genoshans!
Posted by Brian McGackin at 12:43 PM No comments: