Only three weeks remain until Christmas and the release of the new Sherlock Holmes movie, starring Robert Downey, Jr., Jude Law, and Rachel McAdams! If you haven't noticed, the Daily Genoshan has been on somewhat of a Sherlock Holmes kick lately, and that will continue right up to the film's release. Today I have for you the second of Sir Arthur Conan Doyle's full-length Sherlock Holmes novels, The Sign of Four. 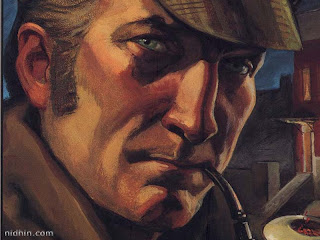 Sherlock Holmes, the world's only unofficial consulting detective, and his faithful friend Dr. John Watson are debating the merits of Holmes' cocaine addiction one day when a lovely young woman enters their office looking for assistance. No, seriously, Holmes is apparently a coke fiend, and only gives it up when he has the thrill of a case to give him a rush instead. Anyway, a woman comes in, worried about a strange letter that she has received. She says that her name is Mary Morstan, and that her father, Captain Morstan, has been missing some ten years. Roughly four years after his disappearance, she began receiving one very large and lustrous pearl each year from an unknown benefactor. Six years and six pearls later, she receives a letter requesting her presence from the same mysterious person who has been sending her the pearls. Too afraid to go meet this person on her own, she asks Holmes and Watson to accompany her. The three set off, and find themselves in the company of an exceptionally rich man named Thaddeus Sholto. Sholto tells Mary that she has inherited half of a large treasure, and that all she has to do in order to claim it is follow him to his brother Bartholomew's estate in Norwood. Holmes, Watson, and Mary Morstan accompany Sholto to his brother's home, but when they arrive, they find Bartholomew dead and the treasure stolen. Holmes sets out to discover how on earth this could have happened, since the room is sealed tight from the inside. The mystery takes Holmes and Watson all over London, and even includes a deadly boat chase! 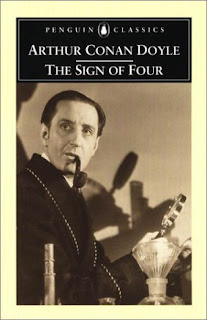 The Sign of Four is much different from Doyle's first Sherlock Holmes novel, A Study in Scarlet, in several ways. First of all, since it is the second novel, introductions and backstory are largely unnecessary, so Doyle moves almost immediately into the mystery. Secondly, the first novel is divided into two distinct sections that are very different stylistically, while the second novel is one large, unbroken story. Thirdly, a sense of familiarity pervades most of the second novel. Watson is presented as being accustomed to some of Holmes' quirkier traits. It reads as being almost identical to the short stories found in Adventures of Sherlock Holmes, which was published in 1892, two years after The Sign of Four. In this way it is an excellent precursor to the majority of Holmes' cases. This lack of freshness does slightly hurt the overall power of the book, but as a segue into further reading, or even as a simple mystery to sit back and enjoy one afternoon, I have to admit it's still a very engaging read.

Doyle is a master at setting up his clues and bringing mysteries to a dramatic conclusion, but in this book he tries to branch out into other areas of writing. One of my favorite things about The Sign of Four was his bizarre attempt to inject a love story into the mystery. In moments of fear, Mary Morstan tends to reach out to Watson instinctively, and a slow, awkward romance tries to push itself in as a subplot. It has almost nothing to do with the rest of the book at all. Another strange feature is that boat chase that I alluded to earlier. While much of the book is focused on deduction and Sherlock Holmes' detective work, there are certain aspects of the plot that make it seem more like an action-adventure novel. There's a boat chase! It's 1890! How fast could those boats really be going? It's a well-written scene, definitely, and Doyle can write suspense as well as he can write quirky little deductions or realistic setting, but I'm curious as to why he would try to fit so many different things into one book. It works, definitely, and leads readers smoothly into his short story collections, so I'm glad he wrote it that way, but the novel suffers somewhat when you compare it to the first.

The Sign of Four
by Sir Arthur Conan Doyle

Story—7.5
Not as polished as the first novel. It's still an incredibly enjoyable book, but I think it could have been a lot better. The descriptions are fantastic, and most of the characters are vivid and real, but Mary Morstan in particular falls flat. You'd think he would have developed her a little better if she was going to be Watson's love interest, right?

Style—9
As the forerunner to an amazing collection of short stories, Doyle does very well by establishing a more permanent style of writing here. A Study in Scarlet may have been a better stand-alone novel, but The Sign of Four is the book that truly sets up what is to come.

General—8
I had a good time with this book, and got through it incredibly quickly, but as I've mentioned, it could've been better. If you plan on reading the short stories, then you definitely need to check this out, since it contains many items that will be referenced later. If you're just looking for a great novel, however, this might not be the book for you.

It may seem strange that I was so down on this book, but still gave it such a high rating. There's no discrepancy, Doyle is an amazing writing. This might not have been his best work, but it's still better than the majority of other books out there. I've had no trouble being drawn into the incredible world that he's built up around Sherlock Holmes, and this is just another example of Doyle's talent at work. Keep reading, Genoshans!
Posted by Brian McGackin at 10:52 AM