The Hound of the Baskervilles (Sir Arthur Conan Doyle)

Two weeks left until the Sherlock Holmes movie! I don't know about you, but I'm hoping to sneak out of the house Christmas morning to go see it. What better present can I give myself than that? As an early gift to you, though, I'm reviewing the third of Sir Arthur Conan Doyle's four Sherlock Holmes novels, The Hound of the Baskervilles. I don't know if this is the case with anyone else, but The Hound of the Baskervilles was the only Holmes work that I had even heard of before I began this exhaustive undertaking, so I was really pumped to check it out. 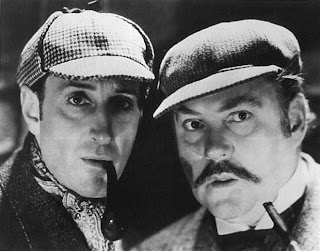 Sherlock Holmes and Dr. John Watson are visited one day by a Dr. James Mortimer, who has a rather strange request. Mortimer wants Holmes' advice as to whether or not someone should move into the recently vacant Baskerville Hall in Devon. The previous tenant, Sir Charles Baskerville, was apparently scared to death—literally, he was frightened so much that he had a heart attack and died—by a massive spectral hound, said to be a curse upon the Baskerville line. Mortimer is set to pick up Sir Charles' nephew, Sir Henry Baskerville, off the morning train, and feels that he should warn the newcomer before they set off for the manor. Holmes decides that this might be an interesting case to study, and suggests that Mortimer and Sir Henry stay in London for a few days before going to Devon. During this time, Holmes discovers that Sir Henry is being followed, and so begins to look at the case as more than just a curiosity. Fearing for Sir Henry's life by this point, Holmes suggests that Watson accompany Mortimer and Sir Henry back to Devon to start gathering facts while Holmes works on a separate case in London.

I have to tell you, this book is absolutely fantastic. Maybe because it's the third one—I'm partial to The Bourne Ultimatum, Return of the King and Return of the Jedi, so I guess I tend to favor third installments—but this is definitely the best of the three that I've read. Sir Arthur Conany Doyle not only paints a beautiful picture of the moor and surrounding countryside where most of the novel takes place, but also tells the clearest story. It's definitely a mystery, with plenty of red herrings and bits of misdirection, so I don't mean clear in that way, but it's an engaging tale that's easy to read even when it's hard to figure out. The action begins almost immediately, with Holmes and Watson debating the qualities of the man who mistakenly left his walking stick in their parlor while they were out. It then progresses steadily, building steam with clue after clue, many of which seem more important than they are, and several of which are easily overlooked. Then Watson goes to Devon and the book really takes off. There are so many suspects with suspicious pasts and plausible motives for wanting to kill off the Baskervilles that I hardly knew which way to look. Even when Holmes solves the mystery and discovers who is behind it all, there are still twenty or thirty pages left where no one has figured out exactly how to catch the culprit or even how the crime was committed. 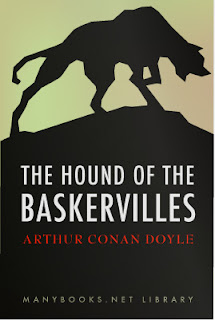 I don't like to go too much into the details of these stories because they are in fact mysteries, and if I stress any one clue too much it could ruin the whole thing. I will say that, of all the Sherlock Holmes tales I've read so far, not just the novels, this is by far the best. There were times when I actually gasped and said, "No way! Wow, I can't believe I didn't think of that sooner." Doyle weaves his threads and plotlines so intricately throughout the novel that it's hard to keep track of every little piece of information. It never seems contrived, though. I never once felt like Holmes or Watson had gotten lucky or stumbled upon a bit of information that they hadn't earned. It reminded very much of Professor Layton and the Curious Village, a Nintendo DS game where the protagonist is a professor trying to solve a mystery. Everywhere he goes, the professor is blocked by riddles that he has to solve in order to progress. Some of the villagers refuse to help him unless he answers their riddle or solves some puzzle of the natural world. The Hound of the Baskervilles is like that. It's cinematic, but also with a strong sense of division between the different levels of the mystery. Each chapter holds new revelations, bringing the reader one step closer to beating the game and solving the mystery of the curse of the Baskervilles.

The Hound of the Baskervilles
by Sir Arthur Conan Doyle

Story—9.17
Doyle does an incredible job of keeping the story interesting, even when it seems like Holmes has reached a dead end. It amazes me how much content there is here. There are so many seemingly disconnected pieces that ultimately form the solution to this mystery.

Style—9
I feel like this is the point where Doyle finally perfected his idea of the mystery genre. This book is more suspenseful and gloomy than the previous two, and works in a strong sense of forboding. The other books are about solving a crime, but this one is about solving one and preventing the next.

General—10
This book is fun to read, but not flippant. It's easy to follow, but suspenseful. I also particularly like that Doyle is able to change point of view without changing narrator. Usually, Watson just regurgitates back whatever it is that Holmes has done. Here, though, there is a significant portion of the book where Watson is on his own trying to figure things out. Watson is easier to relate to than Holmes, since Watson—like the reader—doesn't have Holmes' miraculous deductive powers. It makes a huge portion of the book more accessible, even if it is still a complicated mystery.

There have been some really high ratings in the last few weeks. I worried for a little bit that I was beginning to curve too high, but then realized that I've just been incredibly lucky in finding so many great books. Hopefully this streak continues! Keep reading, Genoshans!
Posted by Brian McGackin at 12:25 PM