Happy Black Friday! I hope you had a wonderful Thanksgiving, and thank you for taking the time to check in with the Genoshan on your holiday weekend! I'll jump right into the review so you can go back to eating your leftovers.

After being wounded in battle in Afghanistan, Dr. John Watson returns to London on leave and attempts to find ways to occupy his time. After several weeks of idle debauchery, he discovers that his funds are quickly running out, and so decides to leave his expensive room and find a more economical situation, preferably with a roommate. Through a mutual friend, Watson meets a strange fellow named Sherlock Holmes, and the two decide to go halvsies on a two-bedroom flat on Baker Street. After a few weeks of living together, however, Watson is confounded by the number of strangers who visit the apartment and pay Sherlock for "private meetings" (get your mind out of the gutter). Holmes finally confides that he is a private detective, and is often consulted by police officers and civilians alike in order to solve difficult cases.

The next day, a case is brought before Sherlock Holmes that he is less than willing to take on, since he knows all the credit will end up going to the police. Watson, however, convinces him to at least check it out, and the two go off to solve their very first mystery together. The police had found a man dead on his back in an uninhabited building, with no signs of any kind of struggle or wounds. For some reason, though, there is plenty of blood on the floor, and the word "Rache" is written on the wall in it. Despite the seeming perplexity of the case and the police's inability to solve the crime, Sherlock Holmes sets off on his own to catch the dead man's killer using only logic and reason as his tools. 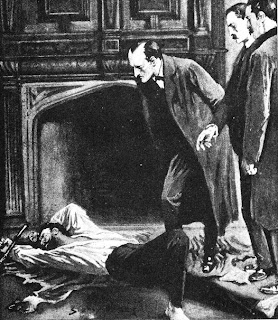 If you've been reading my Wednesday Supplements of Sherlock Holmes short stories, you know by now that this is the basic formula that Doyle uses for most of his mysteries. A Study in Scarlet is different—and better—in quite a few ways, though. First of all, it's a novel, so it's obviously longer. The case is more complex, and there are several dead ends and near misses that Holmes has to shrug off throughout the book. Secondly, it features an incredible flashback that mostly takes place in America, written in a completely different, but equally engaging, voice. You get a kind of western/detective story amalgamation that seems weird at first, but ends up working really, really well. Thirdly—and this is probably the most important—, this is the first story! Here, the reader is introduced to Sherlock Holmes and his faithful biographer, Watson, for the very first time. Doyle makes the meeting remarkably natural, and includes several misgivings that Watson initially has upon meeting Holmes. I thought that I might have gotten sick of all this Sherlock Holmes stuff by now, but A Study in Scarlet is so well written that I could hardly put it down. It's not very long, so I read it all in an evening. That's one of my favorite things about these stories, actually, that I can just pick them up and read through them quickly, and they're almost always enjoyable. This was a much better book than I expected, though. I still have plenty of Holmes stories to get through, and I might find something that I end up liking more than this, but it's definitely my favorite so far. I recommend checking out A Study in Scarlet first if you're interested in this Sherlock Holmes stuff at all. You won't be disappointed.

A Study in Scarlet
by Sir Arthur Conan Doyle

Story—9
Doyle came up with one of the most singular characters in all of literature, but was able to write a compelling story around him as well. I can hardly believe this book was written over a century ago.

Style—8.5
Some people might not like reading mysteries, so I can understand them not wanting to read something like this. When it comes down to it, though, if a book is good, it's good. The Harry Potter books are mysteries; most comic books are mysteries; The Lost Symbol, the fastest selling adult novel in history, is a mystery. Try it out, I think you'll like it.

General—9.5
It's rumored that Doyle stole some of his ideas from Edgar Allen Poe and a couple other people, but I honestly don't even care. He did a great job writing a strong protagonist and an accessible, entertaining mystery. I can't wait for the next one.

There's definitely a reason why Sherlock Holmes is one of the most recognized characters in the world. These books are no joke. I've been having way more fun with this little project than I ever could've imagined. I highly recommend taking a look at some of them.

Again, I hope you had a wonderful Thanksgiving! Thanks for remembering to stop by for a quick review. Have a great holiday weekend, and keep reading, Genoshans!
Posted by Brian McGackin at 3:00 AM