I had some extra time this past week, so instead of reading one novel I read four (and a short story). While The Ultimate Hitchhiker's Guide: Five Complete Novels and One Story is, as its name implies, five novels, I didn't have time to read the fifth. I will eventually—maybe even today—but I figured I could probably get away with only reviewing the first four. If you don't like the first one, you'll most likely not like the rest anyway, and contrary-wise as well. Also, I found out today that Eoin Colfer, writer of the Artemis Fowl series, just released a sixth Hitchhiker's Guide book on October 12 (with the approval of Adams' widow, of course), proving once again that the universe works in mysterious ways—though don't ask me when the first time was. I'm gonna use that as an excuse for why this 30-year-old series is relevant to your life.

Arthur Dent is boring. He lives in England, works for the BBC, doesn't really do much. One day he wakes up to find bulldozers outside his front door, prepared to knock over his house to make way for a new highway bypass. Try as he might, he can't figure out a way to stop this from happening. Luckily for Arthur, Earth is destroyed just after lunchtime, so the problem mostly solves itself. 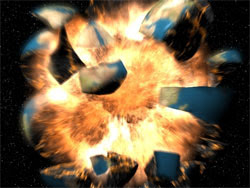 Thus begins the first novel of The Ultimate Hitchhiker's Guide, inexplicably titled The Hitchhiker's Guide to the Galaxy. Arthur is saved from an imminent demise by his friend Ford Prefect, who is not from Earth at all, but actually from a small planet somewhere in the vicinity of Betelgeuse. Arthur and Ford hitchhike off the planet in time to watch it explode, along with everything and everyone Arthur has ever known, loved, or was marginally aware of existing at some point in his life. They meet up with Ford's semicousin Zaphod Beeblebrox, President of the Galaxy, who is piloting a stolen spaceship prototype with an Infinite Improbability Drive, along with a chronically depressed robot named Marvin, and Trillian, the last human female in the Galaxy. They then have a series of highly unlikely adventures, including but not limited to: discovering an undiscoverable planet; killing a potted plant; learning the Answer to the Ultimate Question of Life, the Universe, and Everything; watching a whale explode; and meeting the man who built Norway.

Somewhere in all of that is a plot, but who really cares? The subsequent books continue on in similar fits of improbability, and the whole shebang is generally quite hilarious. It's really interesting how well the humor comes across, considering these books were written decades ago in England. For the most part, I would have believed they'd been written yesterday in New Jersey or something if that's what you told me. Sometimes humor loses its luster over time, but these don't feel dated at all. The books are absurd, but accessibly so. I saw the film version when it came out a few years back, and reading the books now I was surprised at how well the tone was copied. It was difficult not to picture Mos Def as Ford Prefect and Sam Rockwell as Zaphod Beeblebrox as I was reading, but as it turns out the casting for the film was pretty phenomenal, and the picture in my mind throughout all four novels synced up well with what I'd been supplied with by the movie version. I usually read a book before I see its film adaptation, but I think in this case it genuinely doesn't matter which you experience first. The film is slightly more plot driven than the book—the novels all introduce plots, and then proceed to not really worry too much about them—and I think the book is a little bit more fun, but on the whole they both offer up some decent entertainment. 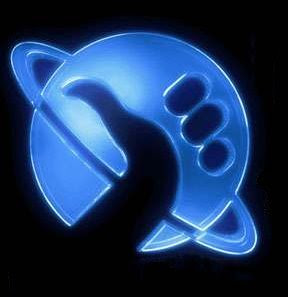 One thing I really enjoyed about these books—aside from the humor, the tone, the improbable events, and the talking mattresses—is that Douglas Adams makes the actual The Hitchhiker's Guide to the Galaxy a real book. There are tons of references to different entries from the guide, and Ford Prefect is himself a researcher for the publisher (he got stuck on Earth for fifteen years when he popped down to update its entry and couldn't find a way off the planet again). Adams is also excellent at using these random entries and factoids to subtly foreshadow events that happen later on in a book or later on in the series. Some of these are casual, offhand remarks made to be humurous, but others are introductions to aspect of the story that become major plot points, and you never quite know which is which. It reminded me a lot of Harry Potter in that way. The universe of The Hitchhiker's Guide to the Galaxy exists already in its entirety; we're being told just a few of its infinite number of stories.

The Ultimate Hitchhiker's Guide: Five Complete Novels and One Story
by Douglas Adams

Story—7.67
It definitely helps having all of these novels together in one place. They read more like pieces of the same large book, and it all fits together very nicely in this format. I got mine at B&N for like $20—a nice leather-bound edition, too—but I'm pretty sure there are several versions.

Style—8.67
The absurd, improbable, humorous tone is consistent throughout. Also, some of the chapters are of a normal, average novel chapter size, but some are only half a page, or a sentence, and it's nice that these are injected into the story every so often.

General—9
All of these books are fun and easy to read, but filled with thought-provoking ideas and universal questions. They all mesh together nicely, but aren't overly formulaic and don't seem like the same plot on a different day. It also isn't nerdy or overly sci-fi. I loved Dune and Ender's Game, don't get me wrong, but this is absolutely nothing like either of those.

I'm definitely going to finish that fifth novel, partly so I can read the new one, but mostly because I'm going to assume that it's just as entertaining as the other four. Adams kept my attention through four novels (and a short story) in under a week. That's nothing to shake an Arcturian Megadonkey leg at. Keep reading, Genoshans!
Posted by Brian McGackin at 12:12 PM