About a year or so ago I picked up a random book off one of the paperback tables at Barnes & Noble called The Inheritance of Loss by Kiran Desai. It had a decent cover and it said it had won all kinds of prizes so I gave it a shot. It wound up being an incredible book (that I highly recommend), so when I saw another Kiran Desai title last week on a similar paperback table at B&N, I figured I'd take a look. Hullabaloo in the Guava Orchard is actually Desai's first novel—so I guess I technically read them out of order, oh well—but I'm excited to say it's just as good as her second.

Sampath Chawla is a twenty-year-old boy living in Shahkot, a small village in northern India, with no goals, ambitions, aspirations, or real prospects of any kind. He's lazy, has no desire to work or learn anything new, and is in fact a bit stupid. Mr. Chawla constantly spouts off bits of advice in the hopes that this might help motivate his son, but none of it seems to stick. When Sampath is fired from his job at the post office, he decides he's had enough, and runs away from home to live in the branches of a guava tree in an orchard outside of town. Life is wonderful in the guava tree for Sampath: he eats whenever he likes; he sleeps whenever he likes; he is no longer bothered by the constant prattle of people telling him what to do. Unfortunately for Sampath, however, this peaceful state of living does not last long. Upon finding him living in his guava tree, a group of villagers determine that Sampath must be a holy man, and the Chawla family sets up a permanent residence at the base of his tree to capitalize on their son's newfound fame.

Now, that might not sound like the most exciting idea for a novel ever, but this book is actually pretty hilarious. It reminded me a lot of 100 Years of Solitude, but in a lighter, funnier way. All of the characters are completely ridiculous: the Chief Medical Officer for the village is a hypochondriac; there's a spy from the Atheist Society determined to prove Sampath is a fake; a band of alcoholic monkeys takes Shahkot hostage as they ransack every house, store, and car while looking for booze. It's a study in ineptitude, since no one can figure out what to do with the monkeys. The superintendent of the police wants to be demoted so he won't have as much work to do. The Brigadier of the army would rather bird watch from the comfort of his toilet. Sampath wants the monkeys to stay, since they are fun and bring him peace, but Mr. Chawla wants them to go, since they disrupt the worshippers who pay to come see Sampath. Even the worshipers themselves end up at odds, and split into two separate religious factions. Everything gets completely out of control, which only makes each character's reaction even more amusing. 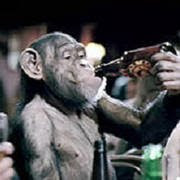 The entire novel is a beautiful satire on family, religion, and life in a small town. What's nice, though, is that the tone remains light throughout. I never felt weighted down with a message or the seriousness of any one situation. Desai's other novel, Inheritance of Loss, is an amazing piece of writing, but it doesn't have the same tone. It's much more serious, and I'm impressed that she is able to set two of her books in a similar setting during a similar time and have them be so vastly different. If you see either one of her novels while you're shopping around for something new to read, definitely pick it up.

Hullabaloo in the Guava Orchard
by Kiran Desai

Story—8.27
Desai plays to her strengths, and doesn't make the book overly long. It's a light, quick read, but it's also not a pushover. This is a solid piece of writing.

Style—8.5
Sampath, Shahkot, and everything about this book comes alive. It's possible that I'm getting so caught up in this one because everything I've read in the past month has been so serious, but I'm pretty sure it's just good writing.

General—9
Ok, this has absolutely nothing to do with the book itself, but check out the wikipedia page for the actual village of Shahkot. Amazing.