This is a classic story from the X-Men's long and convoluted history that I had never read before, so I wanted to see if it was all that it's been hyped up to be.

A team of assassins known as the Marauders track a group of mutants called the Morlocks down to their underground Manhattan lair, the "Alley," a complex series of tunnels. The Marauders then proceed to exterminate the virtually helpless Morlocks, until members of the X-Men, led by Storm, and X-Factor/X-Terminators, led by Cyclops come to their rescue. Several prominent Morlocks are saved, but many more are killed, and members of both the X-Men and X-Factor are critically wounded. 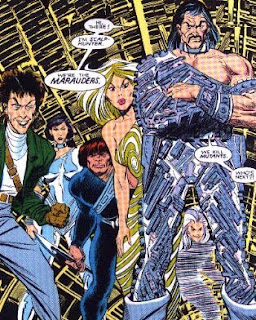 Mutant Massacre was a huge X-men crossover in the Fall of 1986. Parts of the story could be found in Uncanny X-Men, X-Factor, New Mutants, and even Thor, Daredevil, and Power Pack. The overall story was mainly conceived by legendary X-writer Chris Claremont—also notable for the stories "Days of Future Past" and the "Dark Phoenix Saga"—but several writers and pencilers had a hand in the crossover. Aside from the near-decimation of the Morlocks, Mutant Massacre is also an important story in X-Men history because of several events that spun out from its pages. Angel suffers severe damage to his wings, which later have to be amputated to save his life. This leads directly to events that turn him into Archangel, one of the Four Horseman of Apocalypse. Kitty Pryde's mutant ability to become intangible is disrupted, leaving her unable to revert back to her solid form. Colossus sustains incredible damage, leaving him quadriplegic for a time. Wolverine discovers that Jean Grey, thought to be dead, is actually alive and well. All of this is very important, and has a lasting influence on the X-Men universe for years to come, but is the story any good?

The 1980's were an interesting time for comic books, and books written back then definitely don't read the same way as books written now. Claremont and the other Mutant Massacre writers tell a great story, with tons of conflict and drama, but at times it seems a little corny. Almost half the page is dedicated to speech, narration, or thought bubbles. The events of each individual issue are much more exciting than the issues themselves. The Marauders track down the Morlocks, then begin hunting them, killing them off one by one, until finally the X-Men intervene. That's exciting! I can absolutely see Jim Shooter, the Editor-in-Chief of Marvel at the time, getting really amped up and excited for this huge crossover. But then you get horrible narration like this the entire time:

A mile beneath Manhattan...

...are the tunnels where the Morlocks lived...

...until the Marauders killed them.

Wolverine moves silently through the carnage, alert for the slightest sound, the smallest movement, the faintest scent of life.

Violence is in his nature. Murder is not. He means to find those responsible and pay them back--in full measure.

Like, come on now. I know this was written a long time ago, but haven't you ever heard of "show, don't tell"? This is a COMIC BOOK! If there was ever a medium where you could beautifully "show" this is it! Yeah, this was written in 1986, but when you think about it, it was only written in 1986. Think of all the classical works of literature that are hundreds of years old that still read just as well today. You could argue that, because the medium has only been around for about 75 years, the quality mark has yet to stabilize. Back then, maybe tons of speech and narration was the way to go. But is the problem comics from that time period in general? or this book in particular? Either way, I don't highly recommend reading this. The story is important. The events that take place and their consequences are important. If you really need to know first hand everything that has happened in the X-Men universe for any reason, this book is definitely important. It's just not all that fun to read.

Story—6.67
Chris Claremont is somewhat known for his poor execution of extremely high-concept ideas. This is a major event in X-Men history, and sounds like it would be a great read. In theory. Give me a solid, well-written story over this any day.

Style—5.83
It's not unreadable, and you definitely have to allow for the fact that this was written during a time when comic books generally tended to have a lot more speech, narration, and thought bubbles. That being said, it doesn't make it any easier to read.

General—6
If you just kinda skim through most of the dialogue and narration, it's actually a very dramatic story. There's a lot going on, tons of suspense and conflict, and many characters are forced to make difficult decisions. It's got the framework to be something incredibly intriguing.